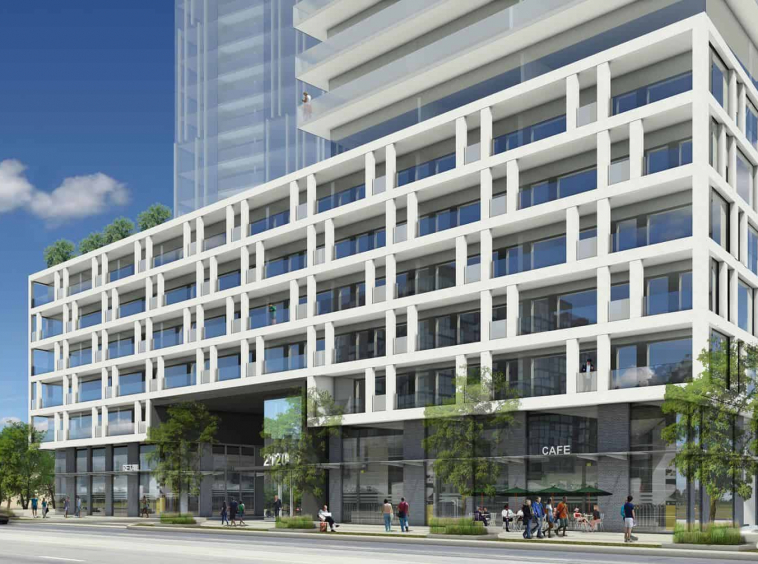 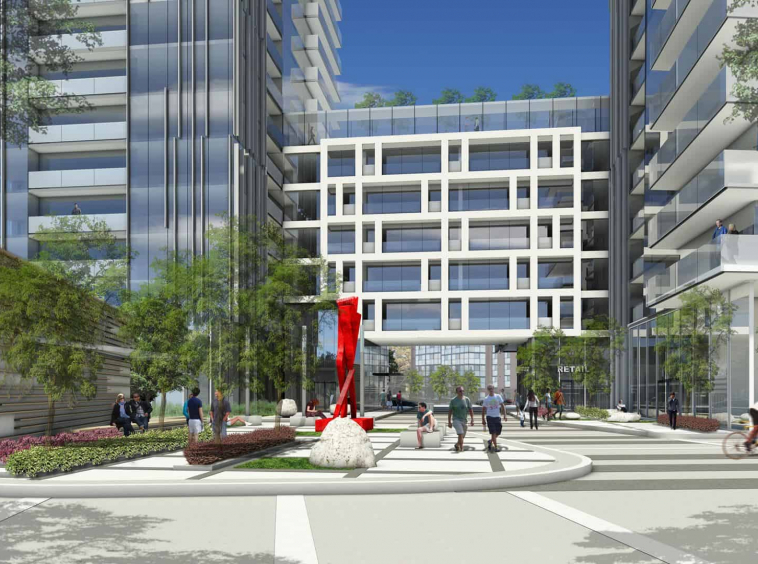 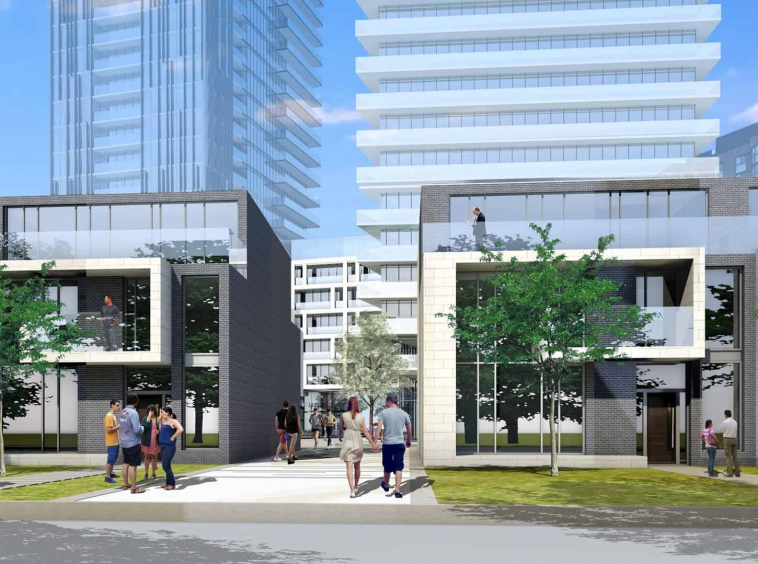 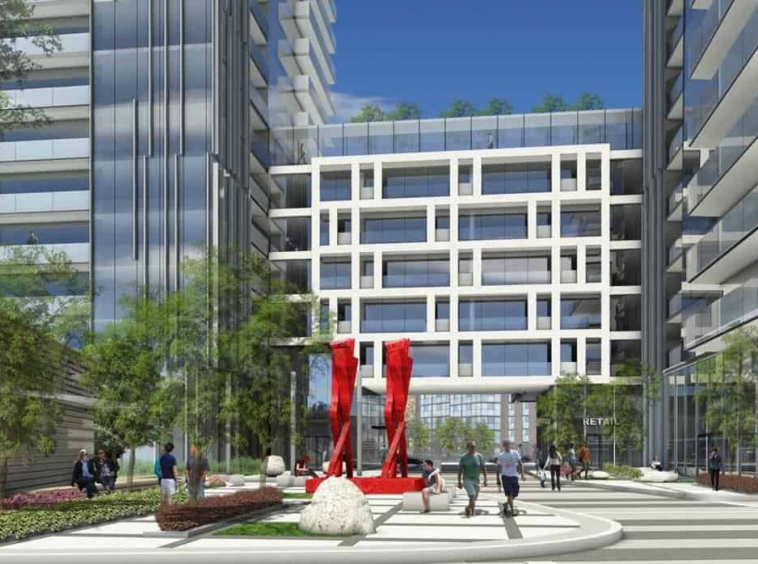 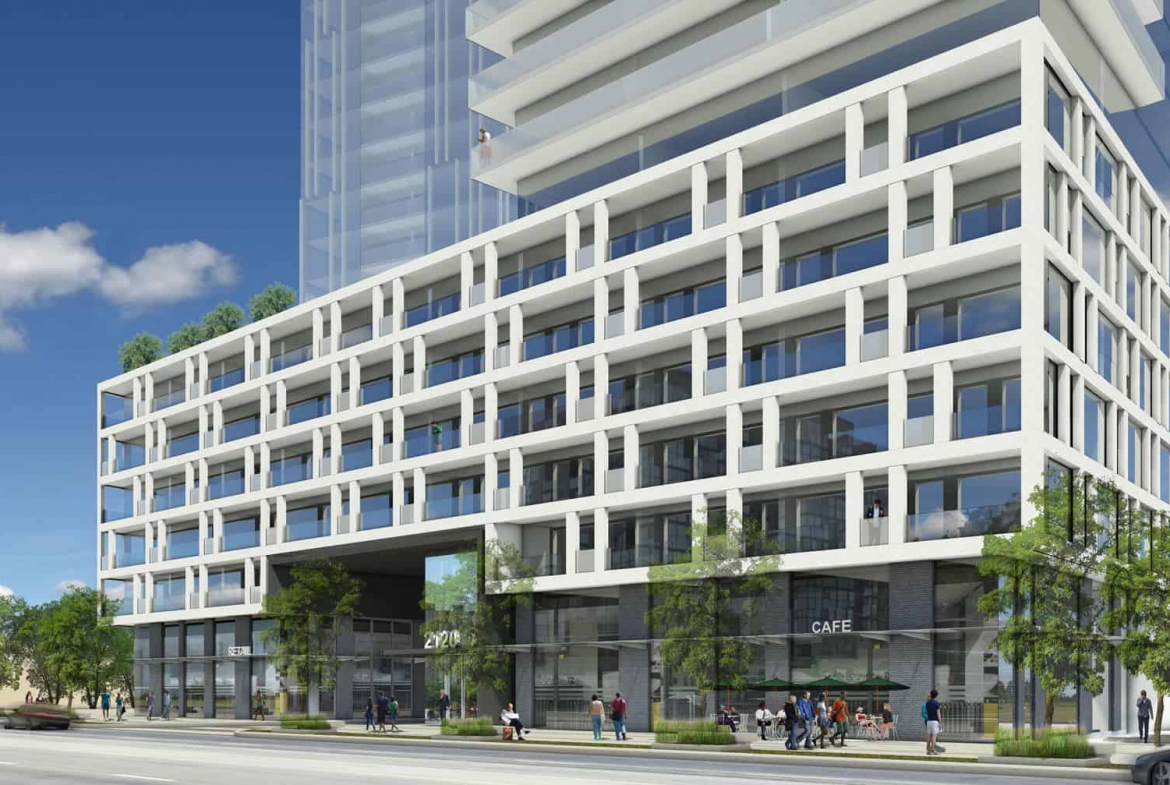 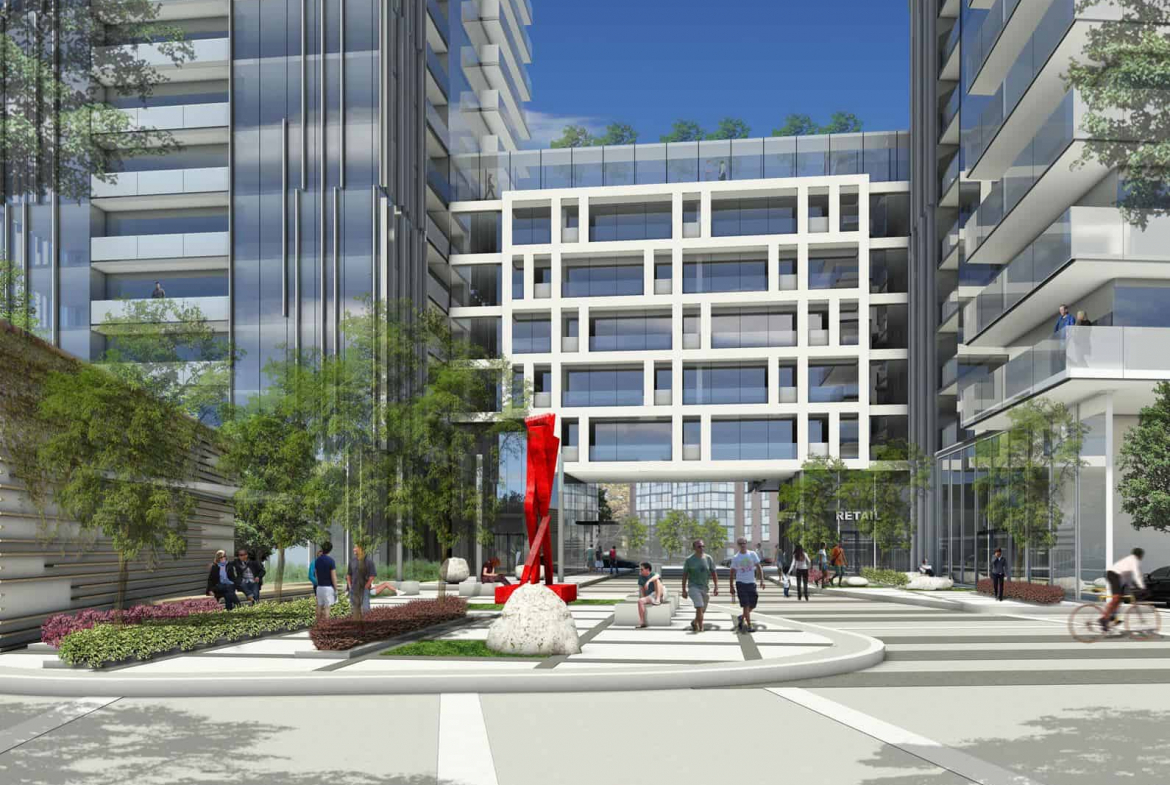 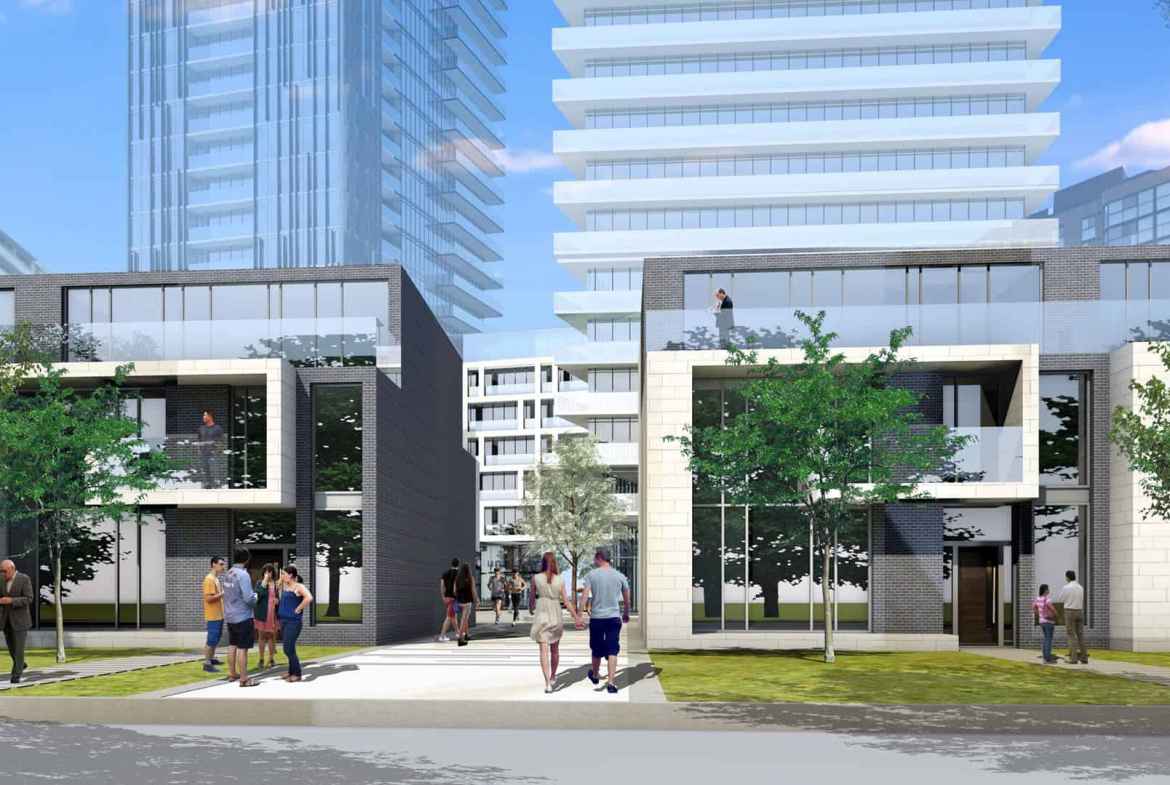 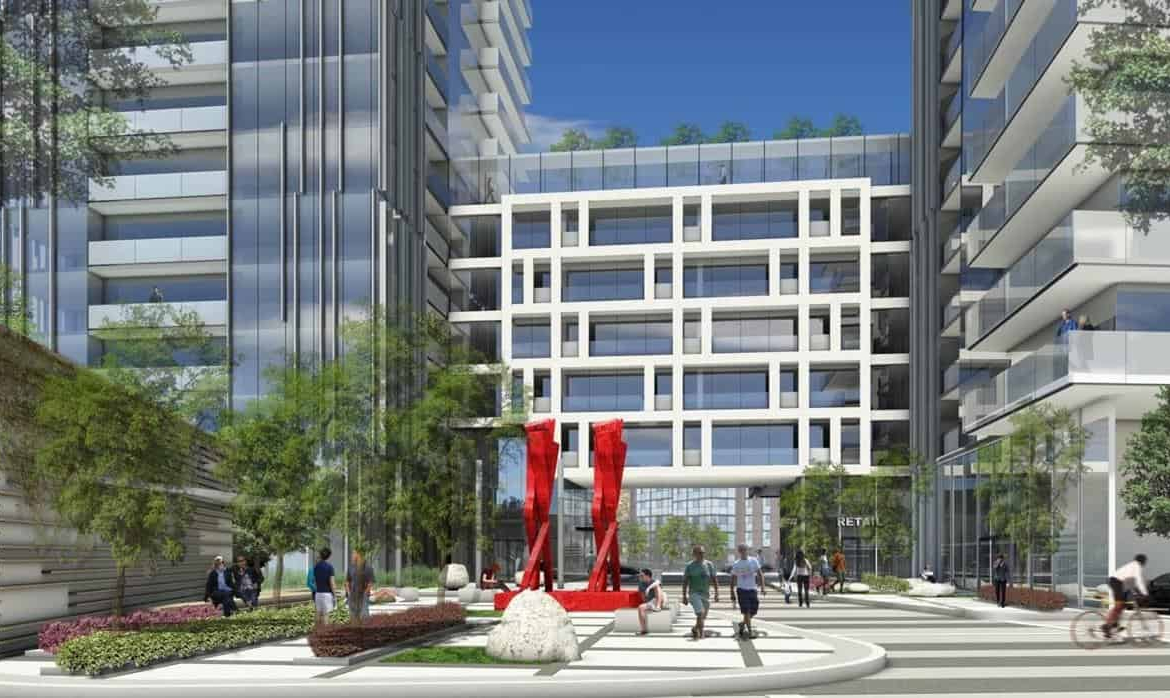 This beautiful mixed-use development is part of a larger initiative to revitalize the Mississauga downtown. Just south of Square One, Gordon Woods will be a stunning condominium, that will also feature 3-storey townhouses, retail space, and gorgeous amenity spaces. Stylish, brightly-lit architecture will make this project a beacon in the Mississauga skyline, and the envy of many.

Located at 2120 Hurontario Street, and being developed by the well-respected Edenshaw Developments, The Residences at Gordon Woods are set for a 2021 occupancy date. Keep reading to learn more about this exciting project, just south of the new Mississauga downtown!

For decades, Square One has been an epicentre for commerce in Mississauga. The shopping centre is a massive 2.2 million square feet of retail. Shopping from Walmart to Hudson’s Bay, Whole Foods to Bulk Barn, everything you could ever need is at Square One. Catch a movie at the Cineplex Cinema, or experience virtual reality and other arcade diversions at the Rec Room. With hundreds of shops, services, and amenities, Square One has been an attraction for people from all over Mississauga, but due to inefficient land usage, it hasn’t been a particularly densely developed area since it’s construction.

In the next ten years, the area around Square One will be densifying. Creating a more “downtown” feel, and for the surrounding neighbourhoods, like Cooksville, this means more development, more opportunities.

Cooksville is the height of convenience in Mississauga. With many schools, a major hospital (Tillium Health Partners Mississauga Hospital) and plenty of urban amenities, like restaurants, strip malls, pharmacies, supermarkets and banks, Cooksville has it all!

All along the primary road of Hurontario Street, which eventually leads to Square One a few minutes away, residents will be able to find just about anything they could ever need, making errands a breeze.

Cooksville also has number of beautiful green spaces and parks, from Sgt. David Yakichuk Park and Brickyard Park in the west, to Richard Jones Park, Cooksville Park and Camilia Park, all which run along the same ravine which winds it’s way from the north of Mississauga down to Lake Ontario.

Right off Hurontario Street, an urban boulevard will be constructed as a charming pedestrian-friendly welcome to residents and visitors alike. Large, leafy trees, and outdoor dining space will combine with retail units along the building’s podium to help create a vibrant community at the building’s base.

Inside, a gorgeous, glass-walled lobby will provide another striking visual for the building and surrounding area, bringing light and life, especially at night. Atop this six-storey podium, two towers are proposed, rising 36 and 22 floors each. One of these towers is set to curve toward Hurontario Street as it rises, being topped with a canopy element. The glass and light aesthetic will continue up the building, shining brightly and making the building a landmark from quite a distance away.

On the seventh floor, just above the podium, the glass facade will give way to a wide amenity space for occupants of the Residences at Gordon Woods containing a number of amenities like shared kitchen/hosting/dining areas, and fitness rooms.

On the West Side of the building, 3-storey townhomes will take up the first three floors of the podium. Designed with an interlocking frame style, these townhomes will have a bold, stylish exterior. Warm and modern, this design will incorporate price terraces and balconies off a more quiet, residential street, where residents can sit, take in the sun, and relax with a morning coffee.

Expected to be completed in fall 2024, a new 18-kilometre LRT will be set up along Hurontario route, bringing the communities of Mississauga and Brampton closer together. All the connections in between will help facilitate travel between the entire region, and will also connect smoothly with the bold new world being done at Square One.

The future Hurontario Light Rail Transit (LRT) and the MiWay Bus Rapid Transit (BRT) will both run directly through the neighbourhood, with stations in the heart of the development. This dedicated rapid transit will be a welcome change from the convoluted bus systems that locals and visitors have previously had to use to travel to and from the area.

One stop along the new LRT will stop directly at the doorstep of the Residences at Gordon Woods, making connections into both the LRT, MiWay Bus Rapid Transit and other connections easy.

Further, The Residences at Gordon Woods will be only a five-minute drive from Cooksville GO Transit Station, bringing residents directly into the heart of Toronto in just a short commute.

Cooksville is also very close to a number of highways. Highway 403, which connects in the north with 401 and the 410 and to the 407 and QEW in the south. This easy highway connection, combined with the major street, Hurontario Street, puts Godon Woods just a few minutes drive to a nexus point for all traffic within Mississauga, and the the GTA.

Edenshaw Developments Limited is a developer based in the GTA. A developer that strives for integrity and community building, they primarily deal with mid-rise and high-rise condos throughout the boroughs of Toronto. Edenshaw sees buying a home and a commitment to a community, and so each project is started with an emphasis on ensuring sustainability in a project, durability of materials and skilled tradespeople. A well built home withstands whatever life throws at us, and the homes and communities built by Edenshaw are dedicated to raising that bar with every project.

Well regarded throughout the GTA housing community, Edenshaw’s recent projects like Chaz near the Bloor/Yonge Subway station, and Alto  on Dundas Street West have earned the developer a reputation as working on some of the most exciting developments in the city. That’s in large part thanks to the focus on building a community rather than simply a building. Edenshaw strives to assess how their project will affect the land and neighbourhood around it, and they work to make the change as smooth as possible and positive as possible – new projects should elevate a neighbourhood, and Edenshaw works to make this happen.

The average selling price at present of pre-construction condominiums in the city is $379K – a good number for families looking to set down roots, and for homeowners looking to invest. Prices per square foot continue to rise as demand increases, with the average sitting currently at $632. There are few better places to set down roots than in new master-planned communities like Lakeview Village.

Demand for condos in the area is high, with developers looking to build up rather than out – and dozens of new projects have been started within the past several years. This kind of design ethic is becoming more and more attractive, especially near the waterfronts of Lake Ontario. Beautiful views are timeless, and for smaller communities nestled along the Golden Horsehoe, properties with patios and suite views of that shimmering lake are in high demand.

As development nearby at Square One continues to boom, and entirely new downtown district is forming. As we’ve seen with the densification of downtown Toronto, the neighbourhoods around these booming developments also see the benefits rather quickly, as more people move to the area and surrounding regions, causing land values all around the heart of the city to rise.

The Residences at Gordon Woods are a beautiful pair of towers. With the initiatives to create a community within the building and at its base, we’re expecting Gordon Woods to be an attractive place for families, students looking for a place near school, and for young professionals looking to live closer to the booming work opportunities in the region. 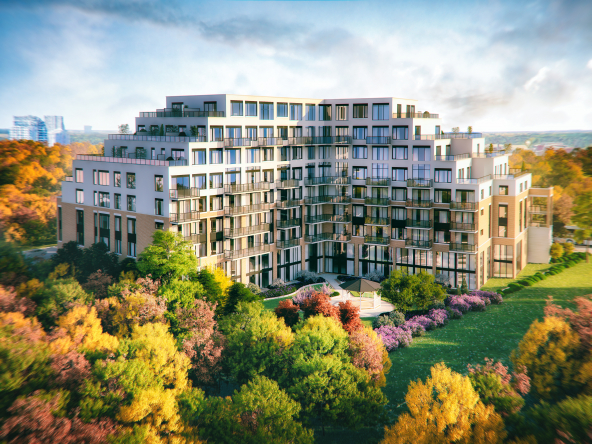 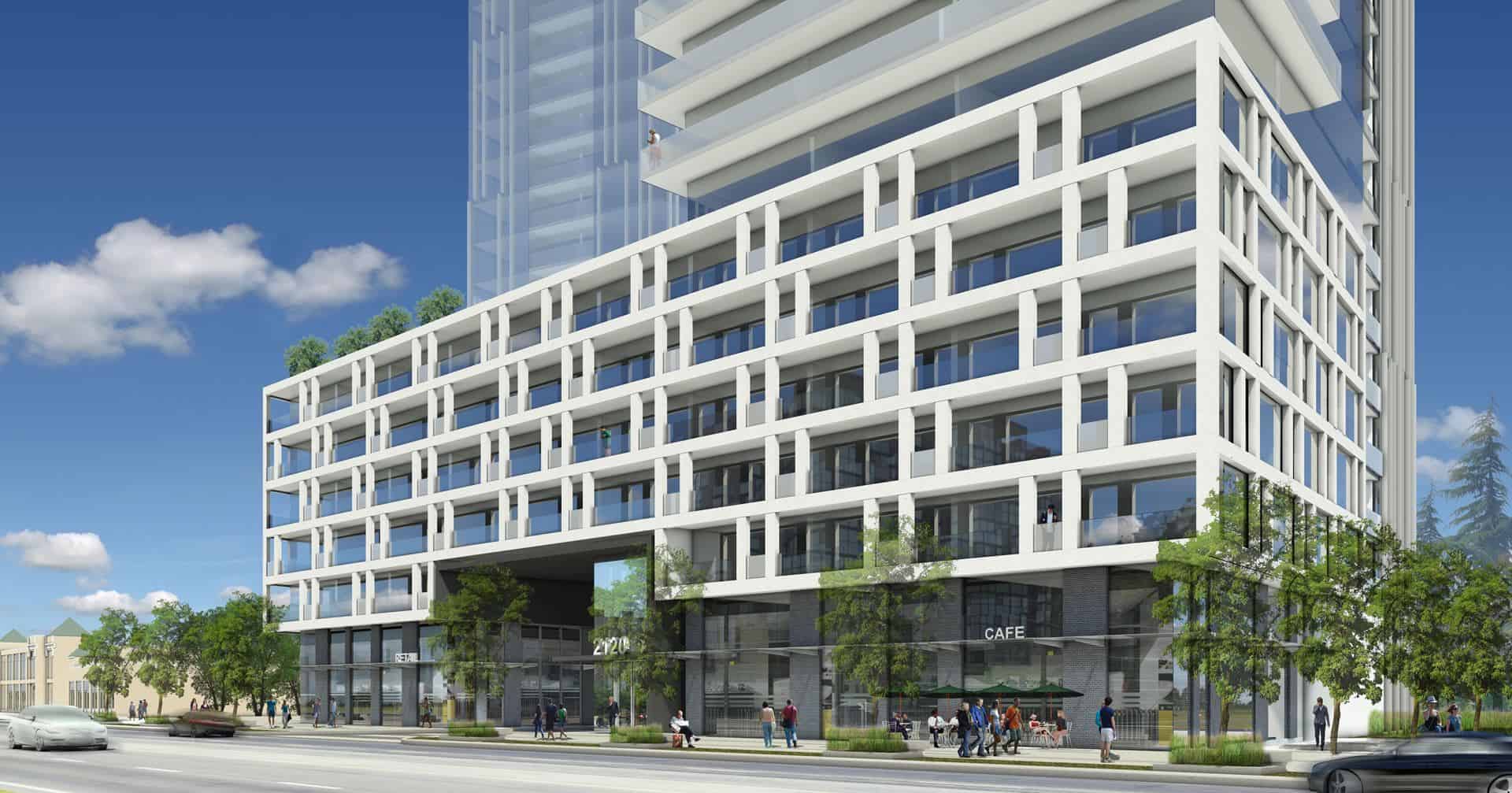 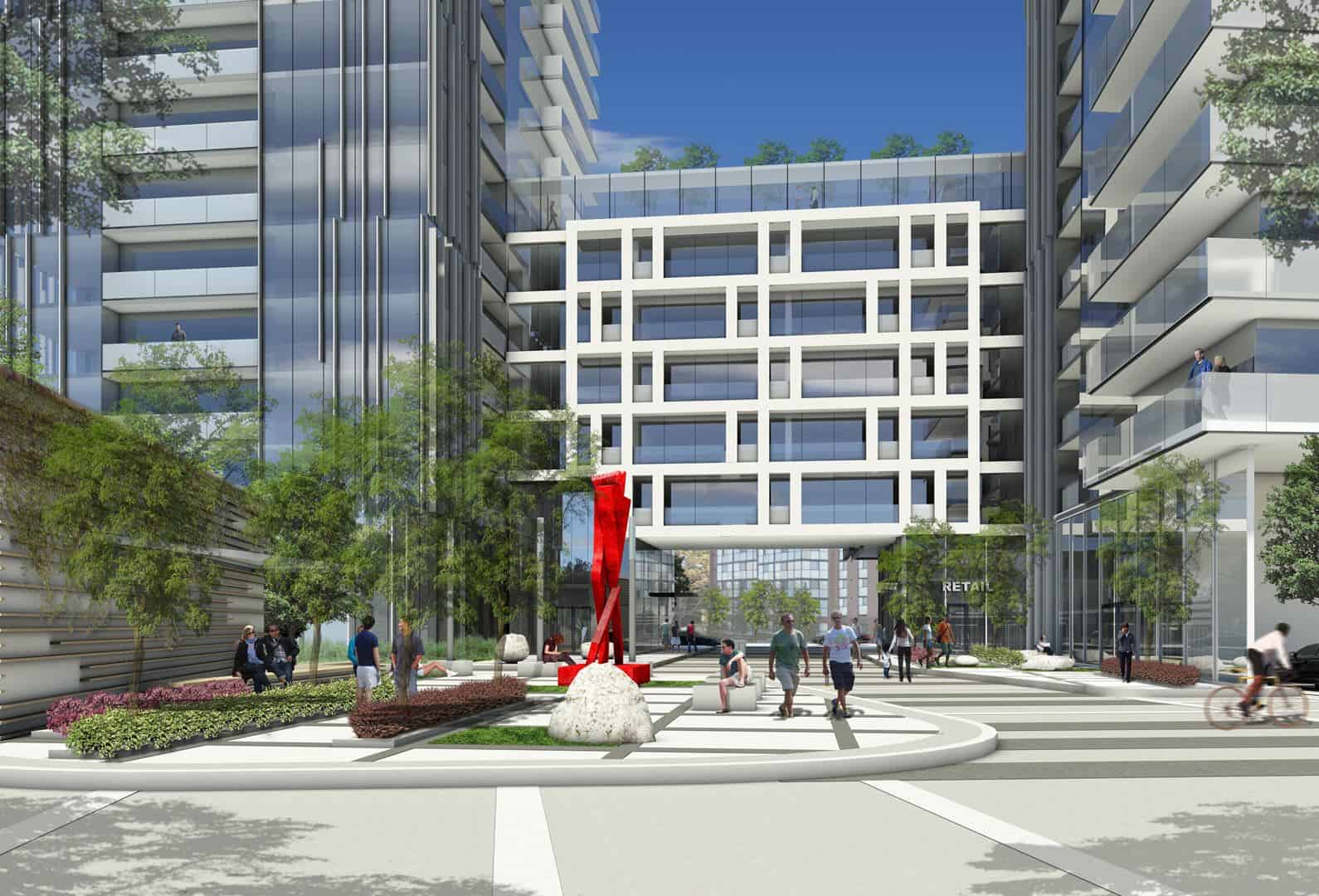 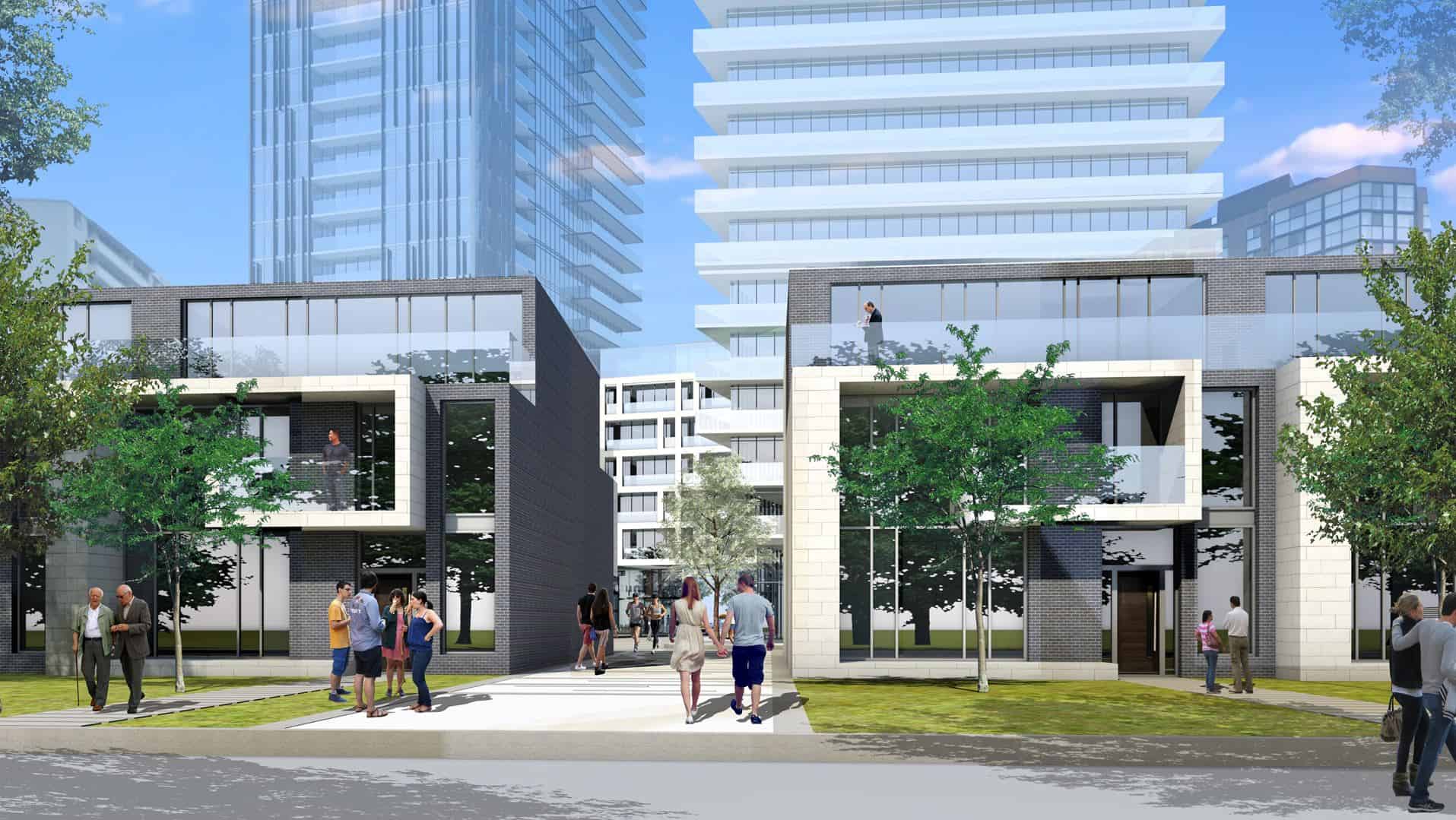 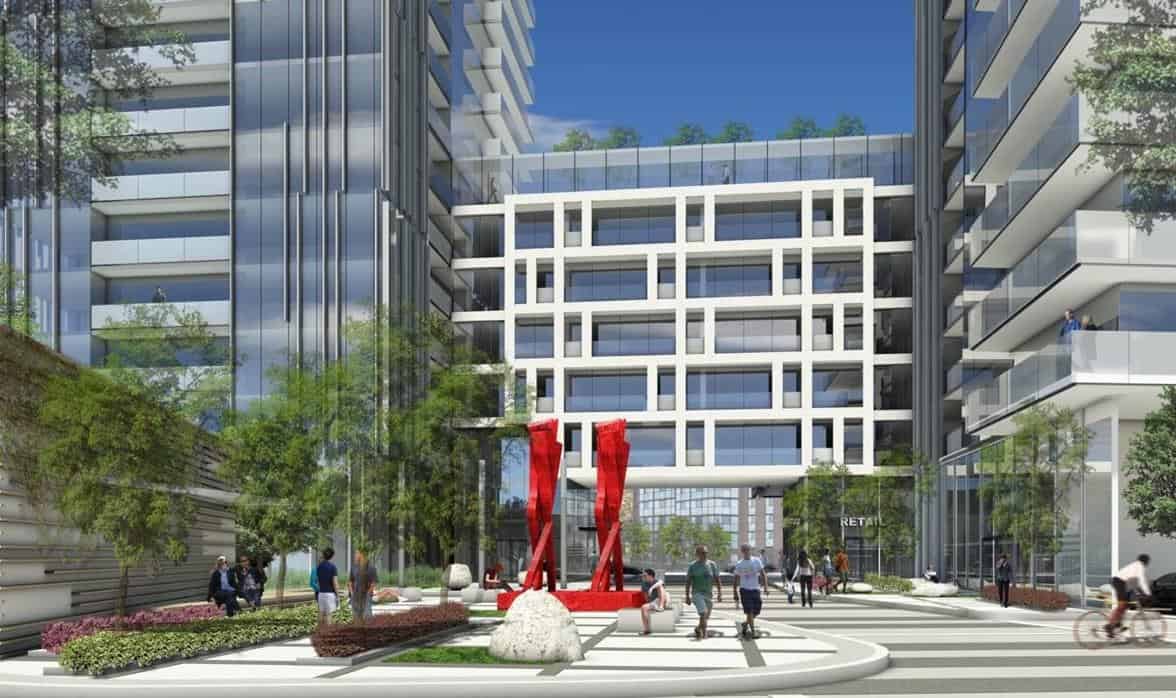